Its purpose is to maximize the work of the United Nations so that the system can provide a collective, coherent and integrated response to national priorities and needs, within the framework of the Sustainable Development Goals.

The overall framework for the coordination of the UN operational activities at the country level is the Common Country Assessment (CCA), a joint assessment of the national development situation and the Partnership for Sustainable Development (UNPSD), an umbrella strategy framework for all the UN entities working in the country that is framed around the Sustainable Development Goals (SDGs) and is in line with the national priorities. The 2016-2020 Partnership for Sustainable Development strategy has five agreed focus areas: (i) democratic governance; (ii) jobs, livelihoods and social protection; (iii) education; (iv) health; and (v) human security and resilience.

The UN Resident Coordinator Office (RCO) fulfills five key functions in support of the responsibilities of the RC and the UN Country Team (UNCT): (1) strategic planning; (2) development economics; (3) partnerships and development finance; (4) data and results management and reporting; and (5) communications and advocacy.

Dr. Sabine Machl of Austria has been appointed UN Resident Coordinator in Georgia on 1 June 2019. Prior to this post, Sabine has worked in international organizations for more than 22 years among those over 7 years for the UN. Her latest assignment was UN Women Representative in Indonesia and Liaison to ASEAN and before that she headed UN Women in Palestine and Kyrgyzstan.

From 2007-2011 Sabine was the Head of Section/Senior Adviser to the OSCE High Commissioner on National Minorities in The Hague covering the countries of the former Soviet Union. From 2005-2007 she was posted in Kyrgyzstan as Deputy Head of the OSCE Centre in Bishkek. She also worked for four years as the Head of the Central Asia desk in the OSCE Conflict Prevention Centre in Vienna. Throughout 2001 Sabine was assigned Deputy Head of the OSCE Mission to Estonia and during Austria’s OSCE Chairmanship in 2000, she was First Secretary in the Austrian Permanent Mission. She worked as Desk Officer for Southeastern Europe in the Political Section of the Austrian Ministry of Foreign Affairs, at the European Parliament, in three different courts in Vienna and as a teacher in Croydon/London.

Sabine holds two Master degrees (in Law and Languages) and a PhD in Law from the University of Vienna. A major amount for her PhD research was carried out in Groningen, the Netherlands. Sabine is fluent in German (mother tongue), English, Russian and French. She is married and has two sons. 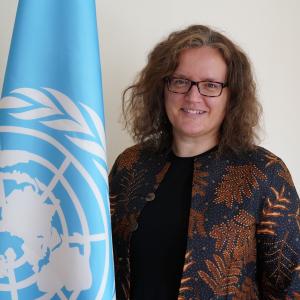